Net Matroyshka was one of our “1337” tagged challenges for the 2021 BSidesSF CTF. This indicated it was particularly hard, and our players can probably confirm that.

If you haven’t played our CTF in the past, you might not be familiar with the Matryoshka name. (Yep, I misspelled Matryoshka this year and didn’t catch it before we launched.) It refers to the nesting Matryoshka dolls, and we’ve been doing a series of challenges where they contain layers to be solved, often by different encodings, formats, etc. This year, it was layers of PCAPs for some network forensics challenges.

The description from the scoreboard was simple:

We heard you like PCAPs, so we put a PCAP inside your PCAP.

You were provided with a file 8.zip, which yielded 8.pcap when unzipped.

Looking at 8.pcap in Wireshark, we see a bunch of small HTTP packets and several HTTP connections. If you look at the HTTP request statistics, we see several connections, including the BSidesSF website, my website, and a request to a private IP for a file named 7.zip. 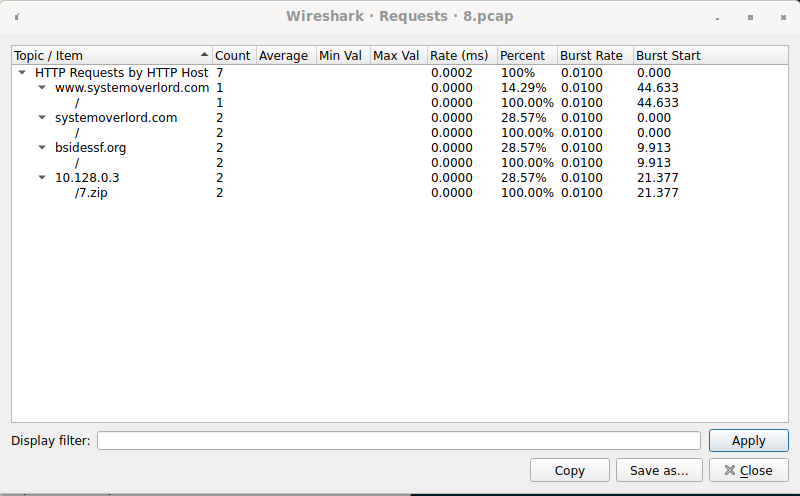 Guessing that we’ll need 7.zip, you can use Wireshark to extract the HTTP object (the contents). (File > Export Objects > HTTP) Extracting 7.zip, you discover that it requires a password. If you return to the connection in Wireshark and look at the TCP connection with Follow TCP Stream, you’ll see the full HTTP Request/Response. In the response, there’s a header that says X-Zip-Password: goodluck,havefun. Using the password goodluck,havefun, we’re able to extract 7.pcap.

If you open 7.pcap in Wireshark, you’ll discover an FTP connection. The entirety of the FTP control connection is:

Unsurprisingly, we see that a file named 6.zip was transferred. If you go to the FTP-DATA protocol stream and use Follow TCP Stream, you can hit Save As (in Raw mode) and get 6.zip. Unzipping 6.zip, you get 6.pcap. (I’m starting to see a pattern here!)

(Side note: this level turned out to be much harder than I really intended. rsyncd is not as well documented as I’d thought.)

Opening 6.pcap, you find a single rsyncd connection. You’ll note the @RSYNCD magic and the version of 31.0. I ended up using the rsync source code to understand the traffic along with a known sample connection to confirm my understanding.

I started by looking at receive_data. If you follow it down, you see that it calls a function called recv_token. Following recv_token, we see it calls simple_recv_token if compression is not enabled.

This function reads a serialized integer off the socket (read_int), then attempts to read up to either CHUNK_SIZE (which is 32k) or the integer bytes. This is a pretty common pattern: send a length encoded in a fixed format, followed by that many bytes of data. Most of the time, I would expect the length to be in “network byte order” (big-endian), but for some reason, rsyncd uses little-endian. I’m guessing this wasn’t originally specified and implementations were on x86. (It also makes the code ever so slightly more efficient on x86.)

So we know now how files are transferred, but it turns out there’s a bunch of metadata before the file transfer. I didn’t want to deal with decoding that. I decided to look for the zip file signature as a start, then back up 4 bytes to read the chunk length. I wasn’t 100% sure this would work, so I set up an rsync server with a known file to test against, and it did. I used scapy to extract the packet contents and then Python’s struct module to extract information.

Returning to the challenge’s 6.pcap, I was able to apply this technique and discovered that it was transferred in 2 chunks: the first was 32768 bytes (32k), which is the maximum CHUNK_SIZE used by rsync, then the 2nd was 3881 bytes.

Using this code gave our 5.zip, which contains, of course, 5.pcap.

A lot of people seemed to attempt to blindly carve the Zip file out of the PCAP stream, using binwalk or other tools. Often, they reported that the file was corrupted, even specifying that it was 4 bytes. This was probably from the error received from unzip:

Both of these were caused by the inclusion of the 4 byte length of the 2nd chunk in the data stream. Failing to recognize that it was part of the rsync metadata lead players astray into believing the Zip file or PCAP were corrupt, but it was the packet carving technique that lead to this.

Opening 5.pcap in Wireshark, we find a single TFTP session. TFTP is a UDP protocol, but we don’t appear to have any missing or out-of-order packets here. Looking at the TFTP request, we see that there’s a read request for 4.zip, and that the “Type” is netascii:

If we use Wireshark to extract 4.zip by using the File > Export Objects > TFTP menu option, then try to unzip the resulting file, we’ll be told it’s corrupt.

It turns out that Wireshark does not decode the netascii decoding in the course of the transfer, so we need to do that after. According to Wikipedia:

Netascii is a modified form of ASCII, defined in RFC 764. It consists of an 8-bit extension of the 7-bit ASCII character space from 0x20 to 0x7F (the printable characters and the space) and eight of the control characters. The allowed control characters include the null (0x00), the line feed (LF, 0x0A), and the carriage return (CR, 0x0D). Netascii also requires that the end of line marker on a host be translated to the character pair CR LF for transmission, and that any CR must be followed by either a LF or the null.

To do the decoding we must substitute a CRLF (\r\n) pair with a plain newline (\n), and a CRNUL (\r\0) with a plain carriage return (\r). This can be done with the following python code:

Note that the order is important, if you reverse the replacements, you could cause corruption. If we apply this to the 4.zip we got out of Wireshark, we can then extract the zip file.

Unzipping the decoded 4.zip, we get 4.pcap. We’ve now made it through half the layers! (Unless, of course, the filenames are misleading…)

Opening 4.pcap in Wireshark, we find a bunch of SMB traffic. Fortunately, encryption is not enabled, or we’d be in a world of trouble. This level is pretty straightforward, as Wireshark has an Export Objects feature for us. (File > Export Objects > SMB). We can directly export 3.zip, and unzipping it, we’re straight on to 3.pcap.

After we open 3.pcap, we find traffic for the “Git Smart Protocol”. You might be used to seeing Git traffic going over either HTTP or SSH, but it turns out Git has its own protocol for data transfer.

The good news is that, unlike rsync, the protocol is well documented. The bad news is that it is more complex to extract data.

This data is also transmitted in chunks, but unlike rsync, the lengths are encoded in 4 hexadecimal characters (so 16 bits only). The data contained in the repository is transmitted as a Git packfile, which is separately described and specified.

At first, I just sought the start of a packfile (PACK), and looked for the 4 hex characters before for length, but there was a byte in between. It turns out git also multiplexes data in order to pass the pack data and status updates at the same time, so the format actually becomes:

Once we have the packfile, we need to decode it and extract the objects from the git repository. Since every layer has been a zipfile, I reason we can extract a zipfile here as well, so I’ll hunt for objects in the packfile that are also zipfiles.

I wrote a script in python to do this (in order to have an automated solution), but you can even do this directly with git. 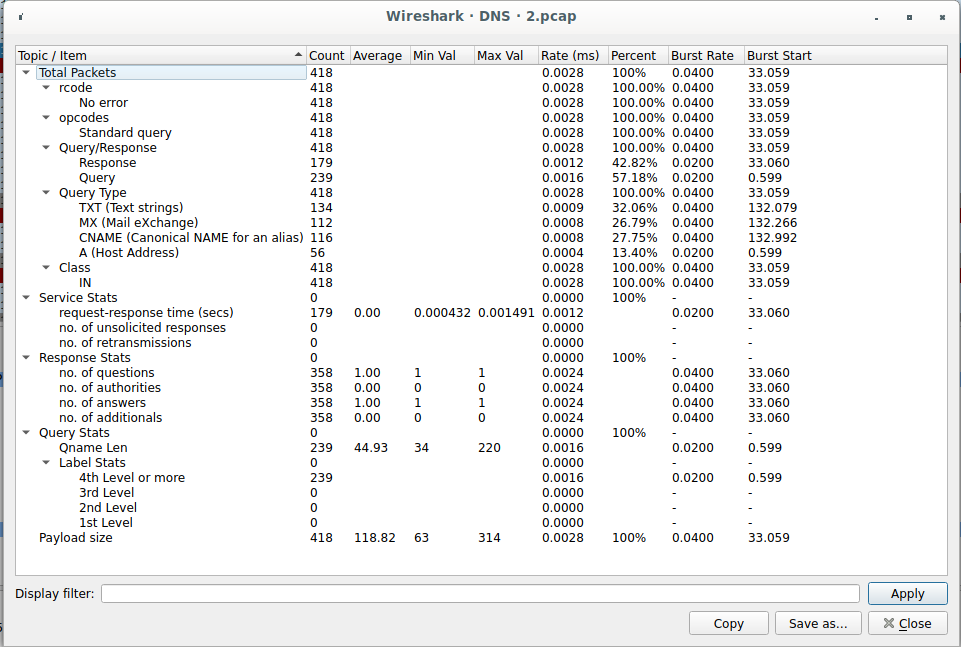 The first few queries we see are for dnscat2.c2.challenges.bsidessf.net. Looking up dnscat2 we find that it’s a DNS tunneling protocol written by fellow BSidesSF CTF organizer @iagox86. The good news is that it’s well-documented: both the transport protocol and the command protocol.

Looking at the command protocol, we see that the file data is sent in one contiguous block, so if we can reconstruct the transport protocol, we can just carve out the zipfile we expect at the next layer.

To reconstruct the transport protocol, we must take each DNS response and decode it. Only 3 types of DNS records are being used: TXT, MX, and CNAME. For TXT records, the entire response will be hex-encoded data. For the MX and CNAME records, the response will be formatted like a valid DNS name by appending the domain of the C2 server, so it will be <hexstring>.c2.challenges.bsidessf.net. The hexstring may be split into multiple labels to fit the DNS limits on 63 bytes per label.

The simple way to handle all this is to delete . and .c2.challenges.bsidessf.net from all the responses, so we just have the hex data left. Then, in each response, it begins with the following:

This is followed by the actual data. If packets were out of order, repeated, or dropped, we might need to deal with this, but I can work around it by just dropping the first 9 octets from each message. I once again turned to scapy to solve this problem:

This gets us 1.zip, which contains 1.pcap, as we expect. Getting close now!

This should be the hardest layer by the tradition of Matryoshka. It turns out that I went a little easy here. If we load 1.pcap into Wireshark, we see a single telnet connection. 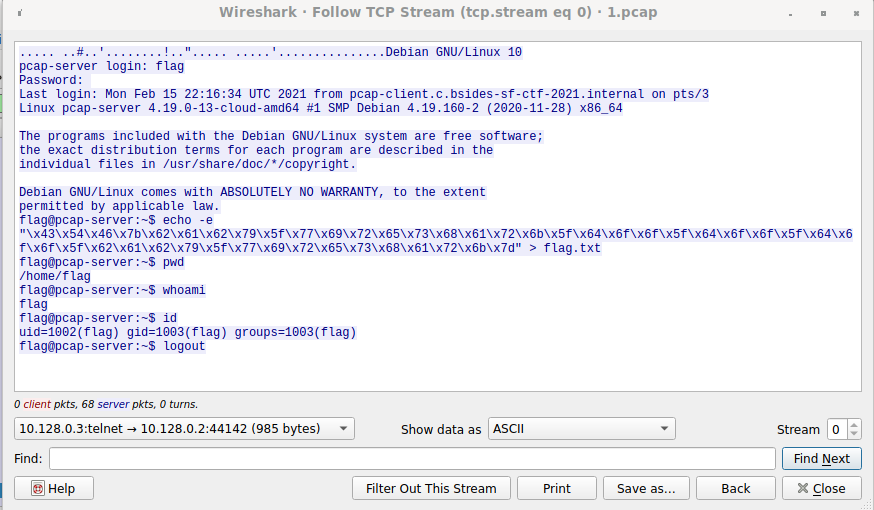 There’s no obvious flag, and the login password appears to be thisisnottheflag, but there’s also a command to cat a bunch of data to a flag.txt file:

If we run this command ourselves, we’re rewarded:

You can see the automated solution script and all the individual layers in our open-source challenge release. Hopefully you found this challenge fun, educational, and/or challenging. I promise no files were corrupt when they were transferred, it just turns out that not all protocols are so straightforward.