Just returned from Hacker Summer Camp (Black Hat, BSides LV, DEF CON) and I’m exhausted. 10 days in Las Vegas is a lot of Las Vegas, even if you don’t spend a lot of time at the slot machines, table games, and shows.

My week started off with a training class at Black Hat: Hardware Hacking with the Hardsploit Framework taught by a couple of guys who clearly knew their hardware. I’ve previously taken Xipiter’s Software Exploitation via Hardware Exploitation, which helped with some of the basic concepts, but the two classes were definitely complimentary. SexViaHex predominantly focused on dumping firmware from embedded microcomputers (that is, they had a kernel, typically Linux, and were running applications on them) and analyzing them for exploitable software vulnerabilities (mostly memory corruption-esque issues). HH with Hardsploit, on the other hand, mostly focused on microcontroller-based embedded devices. This was much more a class of dumping flash to locate stored secrets, understanding the hardware of the device, and working from there. 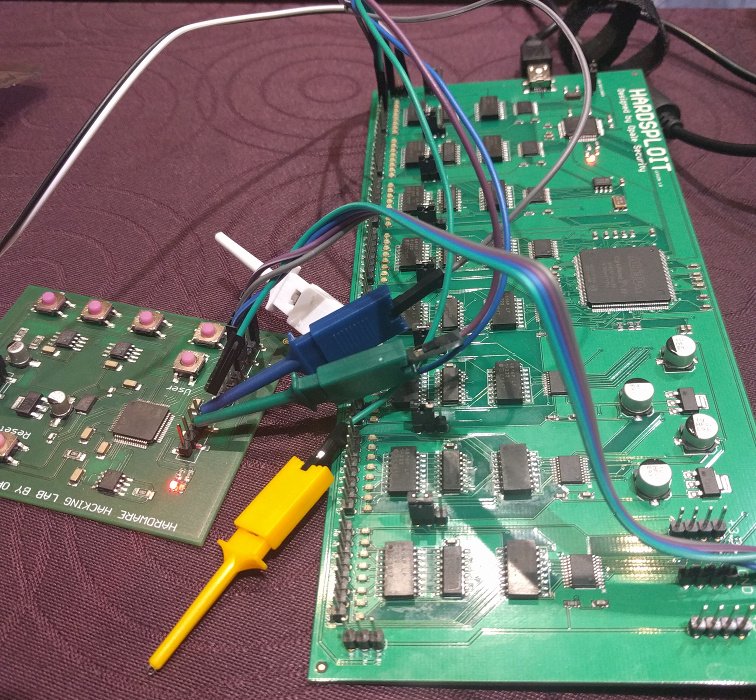 I’m not going to list every thing taught in the class (I don’t think the authors would like that much) but I’ll cover my highlights:

This was only a two-day class, but I believe I learned a ton of new things and got to exercise some skills I don’t get to touch very often. It was an intense experience, and I’d rather think they could do so much more ina 4-day format. I would have no doubts about recommending this class to others, or to taking another (more advanced) class from Opale.

As far as Black Hat Trainings are concerned: well, it includes breakfast and lunch, which is nice, but the food is literally the worst food I had in Las Vegas all week. It was completely stereotypical hotel ballroom food: breakfast was fruit platters and pastries with mediocre coffee and bottles of juice, and lunch was a random assortment of “banquet quality” items (i.e., pasta that wasn’t drained properly so is now sitting in a puddle, salads that are swimming in dressing, etc.). There was also an afternoon coffee/tea service each day, which was surprisingly nice (though swamped by attendees). Having coffee all day long for trainings would have helped my brain, but YMMV.

Next I’m off to BSides Las Vegas and Dichotomy’s Pros versus Joe’s CTF.