Firtog gives us a pcap file that you can quickly see features several TCP sessions containing the git server protocol. The binary protocol looks like this in the follow TCP stream mode: 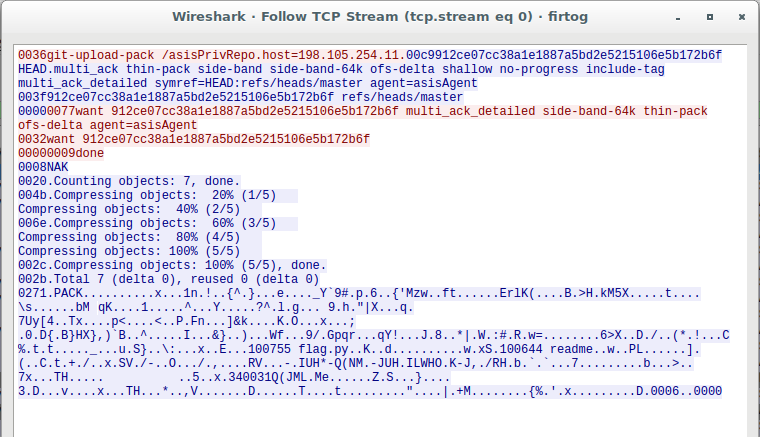 Switching Wireshark to decode this as “Git” almost works, but there’s a trick. If we read the git pack protocol documentation, we’ll see there’s a special side-band mode here, where the length field is followed with a ‘1’, ‘2’, or ‘3’ byte indicating the type of data to follow. We only want the data from sideband ‘1’, which is the actual packfile data. So we’ll grab that data using Wireshark and write it to a file, fixing up the last byte with quick python work.

Once we have the packfiles, we recreate the git repository. Begin by creating an empty git repository with git init. Then, we can use git unpack-objects < PACKFILE on each of the packfiles (in order, or else we won’t get the deltas resolved properly). Finally, to get the structure back to normal, run git fsck and you’ll see something like this:

This dangling commit tells us it’s the only unreferenced commit in the repository (i.e., not referenced as a parent by a commit or merge), so let’s check that one out:

Ok, so now we’re somewhere. Let’s see what we have:

So they grabbed some random data and hashed it, then did some exponentiation byte-by-byte to produce the output. There’s probably some better way to reverse it, but since it’s a limited character set, I just created a map of values to reverse the flag by performing the same math they did.

(I apologize for the quality of the code, but hey, it’s CTF-quality, not production-quality.)