We’re directed to a web application that provides us with the ability to ping an arbitrary host. Like many such web interfaces, this one is vulnerable to command injection. We can provide flags like -v to get the version of ping being used, but inserting other characters, like |, ;, or $() result in a response of invalid character detected. Notably, so do spaces and tabs, significantly limiting the ability to run commands (we’ll see how to get around this shortly). 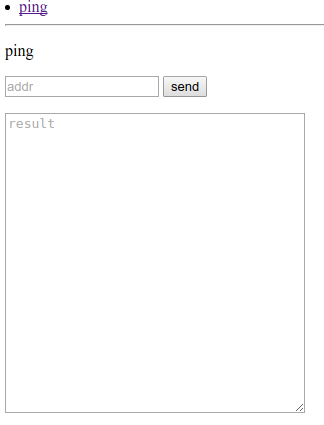 I spent some time testing various characters and discovered that neither ampersands nor newlines were included in the filter set, so these could be used to separate commands. I could quickly list the files in the current directory with &ls, but couldn’t figure out a way to traverse directories.

One of my teammates discovered that you could use brace expansion to add command arguments, so &{ls,pages} lets us list the pages directory:

Adm1n1sTraTi0n2.php looks interesting, but I’d really like to see the source. Several attempts to get source result in an error of addr is too long, which seems to occur at 15 characters. Eventually, we hit upon the idea of using the command grep -Hr . . to grep for every line of every file in the current directory and below. This looks like &{grep,-Hr,.,.} and gives us the source of every file we’re looking at (though not in a very pretty format). I’ve cleaned them up below.

So, we have a file upload with validation to test if the image is, in fact, an image. (getimagesize is pretty hard to fake.) We can upload arbitrary files, but I’m not sure if we can get them included thanks to the detection of slashes in the include in index.php. There’s also the small matter of predicting the value of mt_rand() used in the filename. On second glance, I realize there’s nothing stopping us from uploading a file whose extension is .php, but there’s still the matter of mt_rand(). It actually took me several minutes before I noticed the cookie being set, leaking a value from mt_rand(). I know mt_rand isn’t secure and should be predictable, but I’m not sure how to do it.

It turns out there’s a tool out there to find the seed from a returned value of mt_rand, except it turns out it takes about 10 minutes on my laptop. I realized the mt_srand call to seed mt_rand looked a little bit funny with all the math. Working it through, I realized that, rather than a full 2**32 range for the seed, the entire working range is only between 3000 and 14000. With this range, it turned out a small PHP script was a better option to figure out the next mt_rand value:

With this tool, I was able to predict full filenames, and could upload images with the extension .php. To get code execution, I added <?PHP passthru($_GET['x']); ?> as the EXIF comment in a JPEG image and uploaded it as a .php file. I was quickly able to confirm both that my script and the PHP embedded worked by listing the directory.

Now, to find the flag. It wasn’t in the working directory or the document root, so I checked the root of the system, and found a file named flag, but it turned out it was only readable by the user flag, and I was running as www-data. However, it turned out that there was also a program /read_flag, but attempting to call it from my PHP shell resulted in a Segmentation Fault. So I started a shell with netcat, and tried from this shell. Still, a segmentation fault. Maybe it needed a pty? Fortunately, there’s a nice python one-liner to allocate a pseudo terminal: python -c "import pty;pty.spawn('/bin/bash')" Running /read_flag from this point gave results: