I was cleaning up some old electronics (I’m a bit of a pack rat) and came across a Mac Mini I’ve owned since 2009. I was curious whether it still worked and whether it could get useful work done. This turned out to be more than a 5 minute experiment, so I thought I’d write it up here as it was just an interesting little test.

The last version of Mac OS that was supported is Mac OS X 10.7 “Lion”, which has been unsupported since 2014. Since I’m a Linux guy anyway, I figured I’d see about installing Linux on this. Unfortunately, according to the Debian wiki, this device won’t boot from USB, and I don’t have any blank optical media to burn to. This was the first point where I nearly decided this wasn’t worth my time, but I decided to push on.

Linux is pretty good about booting on any hardware, even if it’s not the hardware you installed on, as kernel module drivers are loaded based on present hardware. I decided to try installing to a disk and then swapping disks and seeing if the Mac Mini would boot. The EFI on the Mac Mini supports BIOS emulation, and that seemed the more likely to work out of the box.

I plugged a spare SSD into my SATA dock and then used a virtual machine with a raw disk to install Debian testing on the SSD. I then used the excellent iFixIt teardown and my iFixit toolkit to open the Mac Mini and swap out the drive. I point to the teardown because opening a Mac Mini is neither obvious nor trivial.

I plugged in the Mac Mini along with a network cable and powered it on, hoping to see it just appear on the network. I gave it adequate time to boot and did a port scan to find it – and got nothing. Thinking it might have been a first boot issue, I rebooted the Mac Mini, waited even longer, and checked again – and once again, couldn’t find it. I checked the logs on my DHCP server, and there was nothing relevant there. This is the second point at which I considered quitting on this.

I decided to see what error I might have been getting, or at least how far it would get in booting, so I dug out a DVI cable and hooked it up to a monitor. Powering it on again, I got 30 seconds of grey screen from the EFI (due to the BIOS boot delay mentioned in the Debian wiki page), and then – Debian booted normally.

Okay, maybe networking was just broken. I did another port scan of my lab network – and there it was. Somehow it had just started working. I felt so confused at this point. I began to wonder if connecting a monitor had been the fix somehow. A few Google searches later, I had confirmed my suspicion – this Mac Mini model (and several others) will not boot unless it detects an attached monitor. There’s a workaround involving a resistor between two of the analog pins (or a commercial DVI emulator), but for the moment, I just kept the monitor attached.

At this point, I had the Mac Mini running Debian Testing and everything seemed to be more or less working. But would it be worth it in terms of computing power and electrical power?

I decided to run just a handful of CPU benchmarks. I wasn’t looking to tweak this system to find the maximal performance, just to get an idea of where it stands as a system.

I began to wonder how all these results compared to something like a Raspberry Pi, so I pulled out a Pi 3B+ and a Pi 4B and ran the same benchmarks again.

As can be seen, in most of the tests, the Mac Mini with a Core 2 Duo is trading blows back and forth with the Raspberry Pi 4B – and gets handily beat in the POV-Ray 3.7 test. Below is a chart of normalized test results, with the slowest device a 1.0 (always the Pi 3B+), and all others represent how many times faster the other systems are. 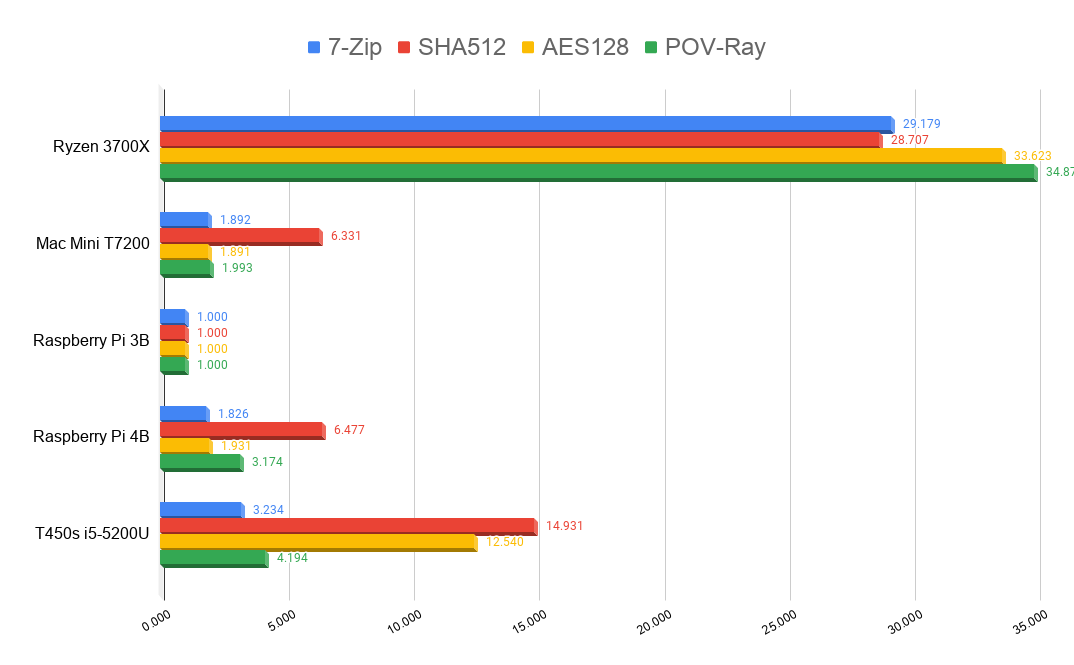 During all of these tests, I had the Mac Mini plugged into a Kill-A-Watt Meter to measure the power consumption. Idling, it’s around 20 watts. Under one of these load tests, it reaches about 45-49 watts. Given that the Raspberry Pi 4B only uses around 5W under full load, the Pi 4B absolutely destroys this Mac Mini in performance-per-watt. (Note, again, this is an old Mac Mini – it’s no surprise that it’s not an even comparison.)

Given the lack of expandability, the mediocre baseline performance, and the very poor performance per watt, I can’t see using this for much, if anything. Running it 24/7 for a home server doesn’t offer much over a Raspberry Pi 4B, and the I/O is only slightly better. At this point, it’s probably headed for the electronics recycling center.