HackerBoxes is a monthly subscription service for hardware hackers and makers. I hadn’t heard of it until I was researching DEF CON 25 badges, for which they had a box, at which point I was amazed I had missed it. They were handing out coupons at DEF CON and BSidesLV for 10% off your first box, so I decided to give it a try. 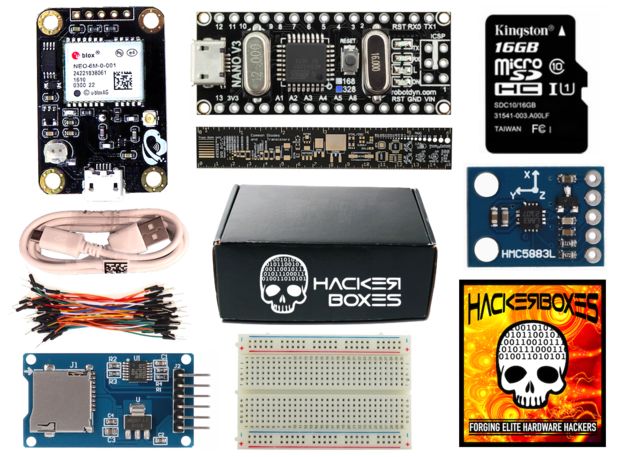 First thing I noticed upon opening the box was that there’s no fanfare in the packaging or design of the shipping. You get a plain white box shipped USPS with all of the contents just inside. I can’t decide if I’m happy they’re not wasting material on extra packaging, or disappointed they didn’t do more to make it feel exciting. If you look at their website, they show all the past boxes with a black “Hacker Boxes” branded box, so I don’t know if this is a change, or the pictures on the website are misleading, or the influx of new members from hacker summer camp has resulted in a box shortage.

I unpacked the box quickly to find the following:

If you’ve been trying to do the math in your head, I’ll save you the trouble. In quantity 1, these parts can be had from AliExpress for about $30. If you’re feeling impatient, you can do it on Amazon for about $50. Of course, the value of the parts alone isn’t the whole story: this is a curated set of components that builds a project, and the directions they provide on getting started are part of the product. (I just know everyone wanted to know the cash value.)

Compared to some of their historical boxes, I’m a little underwhelmed. Many of their boxes look like something where I could do many things with the kit or teach hardware concepts: for example, “0018: Circuit Circus” is clearly an effort to teach analog circuits. “0015 - Connect Everything” lets you connect everything to WiFi via the ESP32. Even when not multi-purpose, previous kits have included reusable tools like a USB borescope or a Utili-Key. Many seem to have an exclusive “fun” item, like a patch or keychain, in addition to the obligatory HackerBoxes sticker.

In contrast, the “Hacker Tracker” box feels like a unitasker: receive GPS/magnetometer readings and log them to a MicroSD card. Furthermore, there’s not much hardware education involved: all of the components connect directly via jumper wires to the provided Arduino Nano clone, so other than “connect the right wire”, there’s no electronics skillset to speak of. On the software side, while there are steps along the way showing how each component is used, a fully-functional Arduino sketch is provided, so you don’t have to know any programming to get a functional GPS logger.

Overall, I feel like this kit is essentially “paint-by-numbers”, which can either be great or disappointing. If you’re introducing a teenager to electronics and programming, a “paint-by-numbers” approach is probably a great start. Likewise, if this is your first foray into electronics or Arduino, you should have no trouble following along. On the other hand, if you’re more experienced and just looking for inspiration of endless possibilities, I feel like this kit has fallen short.

There’s one other gripe I have with this kit: there are headers on the Arduino Nano clone and the MicroSD breakout, but the headers are not soldered on the accelerometer or GPS module. At least if you’re going to make a simple kit, make it so I don’t have to clean off the soldering station, okay?

So, am I keeping my subscription? For the moment, yes, at least for another month. Like I said, I’ve been impressed by past kits, so this might just be an off month for what I’m looking for. I don’t think this kit is bad, and I’m not disappointed, just not as excited as I’d hoped to be. I might have to give Adabox a try though.

As for the subscription service itself: it looks like their web interface makes it easy to skip a month (maybe you’re travelling and won’t have time?) or cancel entirely. I’m not advocating cancelling, but I absolutely hate when subscription services make you contact customer service to cancel (just so they can try to talk you into staying longer, like AOL back in the 90s). The site has a nice clean feel and works well.

If anyone from HackerBoxes is reading this, I’ll consolidate my suggestions to you in a few points:

Overall, I’m excited to see so much going into STEM education and the maker movement, and I’m happy that it’s still growing. I want to thank HackerBoxes for being a part of that and wish them success even if I don’t turn out to be their ideal demographic.