I played in the DEF CON quals CTF this weekend, and happened to find the challenge beatmeonthedl particularly interesting, even if it was in the “Baby’s First” category. (DC Quals Baby’s Firsts aren’t as easy as one might think…)

So we download the binary and take a look. I’m using Binary Ninja lately, it’s a great tool from the Vector35 guys, and at the right price compared to IDA for playing CTF. :) So I open up the binary, and notice a few things right away. This is an x86-64 ELF binary with essentially none of the standard security features enabled:

At the beginning there’s a little twist, it prompts you for a username and password. It’s not hard to figure out what these should be, just take a look at the functions checkuser and checkpass. In checkuser you can see that the username should be mcfly. In checkpass, it’s interesting that the function copies the user input to an allocated buffer on the heap before checking the password, and all it checks is that it beings with the string awesnap. The memory chunk is not freed before continuing, and in fact, if you fail the login check, you will repeatedly get checks that allow you to continue writing to segments on the heap. The copies are correctly bounds-checked, so there’s no memory corruption here. I’m not sure what the point of copying to the heap is, as I didn’t need it to solve the level.

Let’s take a look at the add_request function that creates the new request entries. Looking through it, we see it allocates a chunk for the request entry and then reads your request into the allocated chunk. It took me a moment to notice that there’s something strange about the malloc and the respective read of the request, but I’ve highlighted the relevant lines for your ease. 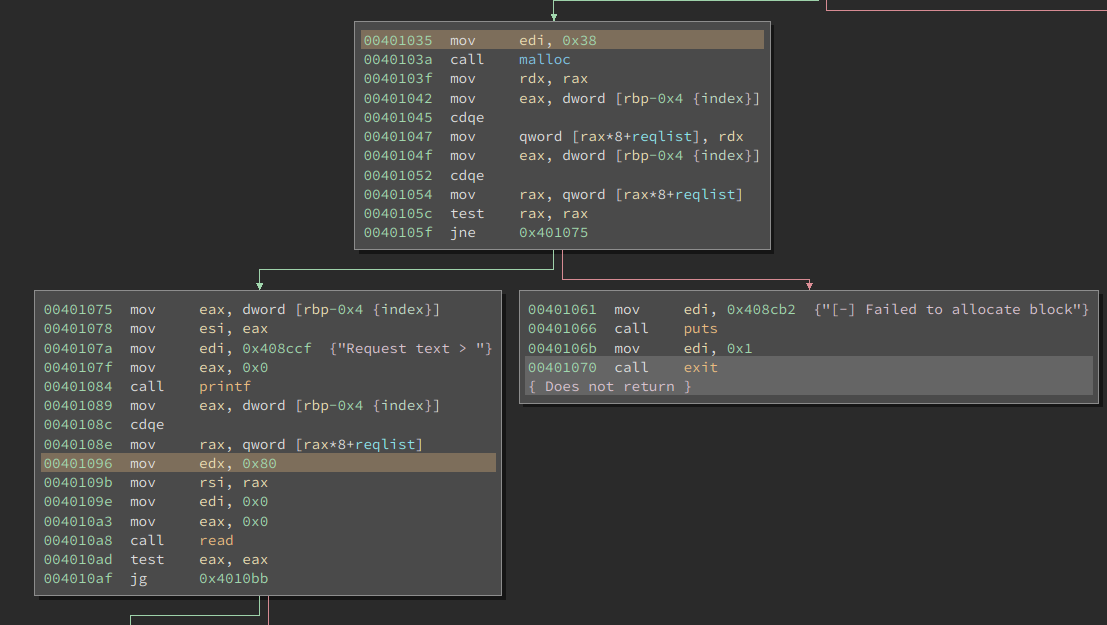 Yep, it allocates 0x38 bytes and then reads 0x80 bytes into it. Well, that seems opportune, depending on what’s past the chunk I’m reading into. It doesn’t appear that his has any function pointers or vtable pointers (it appears to be pure C), so nothing like that to overwrite. Heap metadata corruption is a thing of the past, right? Well, if you notice that malloc is in blue and other functions (printf, read) are in orange, you might realize something. The malloc implementation being used by this binary is compiled into the program. A quick test does, in fact, show that this version of malloc does not appear to use any validation checks on the heap metadata:

So it seems like we can use the unlink technique described by Solar Designer in 2000 to exploit heap metadata corruption via free. If you’re not familiar with the technique, there’s a more digestable version here. This technique allows you to write one pointer-sized value at one address of your choosing. (Obviously, if you want to try to write more than one, you can sometimes repeat the technique if the circumstances allow.) Basically, you want to allocate two consecutive blocks, overflow the first into the second in such a way that the 2nd meets some special properties, and then free the first chunk, causing the malloc implementation to attempt to coalesce the two free blocks into a bigger block and unlink the old “free” block. Our crafted block must:

A common technique for this is to overwrite a pointer in the Global Offset Table (GOT). If you’re not familiar with the GOT, I’ve previously written about using the GOT and PLT for exploitation. Since there is no RELRO (Read-Only Relocations) on this binary, we can apply this technique here in a straightforward fashion. We can overwrite any function that will be called after the free occurs. For this binary, we can use any of several functions, but both puts and printf are excellent choices since they’re called in fairly short order (by printing the menu the next time).

So what do we write? Well, we want to point to some shellcode. But where is our shellcode? Since there’s not many places to put things on the stack and no globals, I guess it’ll have to be the heap. We do have ASLR to contend with, so we need a leak of a heap address. It took me a while to realize how we could get this, but then I hit upon it: by creating fragmentation within the heap, the malloc implementation will have placed pointers for the circular linked list of free blocks into the free blocks themselves. Then overflowing an adjacent block right up to the pointer, and printing the requests, we can get the value of the pointer. From that, we can round down to the start of the page and get the beginning of the heap area.

Finally, we just need to place some shellcode in one of our blocks. Note that many (all?) of the DEF CON Quals challenges ran in a seccomp sandbox that blocked the ability to use execve, so we’ll have to use a open/read/write shellcode.

Putting it all together (sorry, it’s a bit sloppy, didn’t have time to clean it up yet):