Butterfly was a 150 point pwnable in the 2016 PlaidCTF. Basic properties:

It turns out to be a very simple binary, all the relevant code in one function (main), and using only a handful of libc functions. The first thing that jumped out to me was two calls to mprotect, at the same address. I spent some time looking at the disassembly and figuring out what was going on. The relevant portions can be seen here: 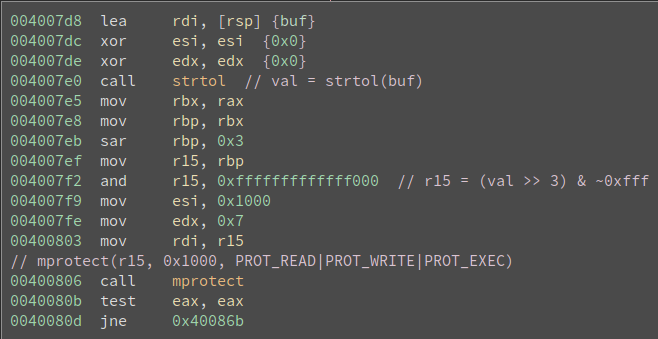 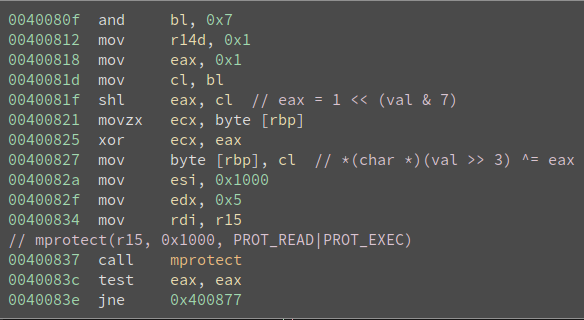 I determined that the binary performed the following:

The TL;DR is that we’re able to flip any bit in any mapped address space of the process. Due to ASLR, I decided to focus on the .text section of the binary as my first goal. Specifically, I began looking at the GOT and all of the executable code after the bit being flipped. I couldn’t immediately happen on anything obvious (there’s not some branch to flip to system("/bin/sh") after all).

I had an idea that redirecting control flow with one of the function calls (either mprotect or puts) seemed like a logical place to flip bits. I didn’t see an immediately obvious choice, so I wrote a script to brute force addresses within the two calls, flipping one bit at a time. I happened upon a bit flip in the call to mprotect that resulted in jumping back to _start+16, which effectively restarted the program. This meant I could continue to flip bits, as the one call had been replaced already.

Along with one of my team mates, we hit upon the idea of replacing the code at the end of the program with our shellcode by flipping the necessary bits. We chose code beginning at 0x40084d because it meant we could flip one bit in a je at the top to get to this code when we were ready to execute our shellcode.

We extracted the bytes originally at that address, xor’d with our shellcode (a simple 25-byte /bin/sh shellcode that I’ve previously featured), and determined which bits needed to be flipped. We then calculated the bit flips and wrote a list of numbers to perform them.

In short, we needed to:

My team mate and I both wrote scripts to do this because we were playing with different techniques in python. Here’s mine:

Redirecting to netcat allowed us to obtain a shell, and the flag. Great challenge and amazing to see how one bit flip can do so much!